A New Hampshire radio host is fired after filming herself harassing a group of Hispanic landscaping laborers in a racist diatribe sparked. A former host for the WSMN radio talk show, Dianna Ploss, had been on her way into the studio in downtown Nashua on July 10 when she happened upon a group of workers.

Ploss became incensed when she heard a Caucasian worker from Morin’s Landscaping Spanish to his Hispanic coworkers. She heard them speaking in Spanish while working along the roadside. ‘Are you speaking English?’ Ploss is yelling at the workers in the video. ‘It is America. English. English. English,’ she repeats several times.

In a bizarre effort to justify her views, Ploss tells the laborers, ‘you should be speaking English; you work for the state.’ The worker’s reply we work for a private company and not the state; Ploss remains undeterred. Then she asks, ‘Is anyone here illegal?. ‘It is America. Speak English,’ she said again as she walks past the workers.

Ploss, a devoted supporter of Trump, launches into a rambling and paranoid talk about Communism.
Further, she says, ‘So they have these people out here, who don’t speak English and putting in this stuff, those taxpayers and paying for and look what they’re doing. This is Communism. This is Communism,’ she repeats. ‘They’re taking over these streets.’

Amid the commotion began by Ploss, an African American man is seen approaching her from the other side of the road, asking her, ‘Why are you harassing these people?’ Ploss asks the passerby, ‘Are they in America?’, he replies yes. She retorts, ‘Then they should be speaking English,’ The bystander man asks her what basis the laborers are legally required to speak English. 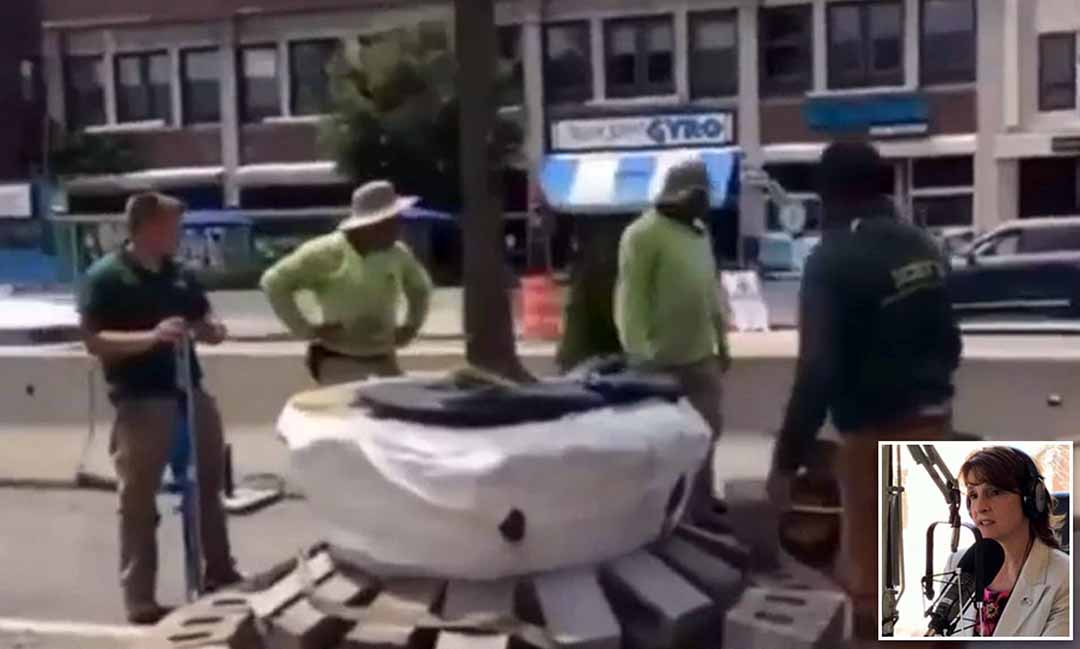 Dianna Ploss, a host for the WSMN radio show and a group of workers working along the roadside in America(above picture)

Ploss is simply responding without further explanation, ‘They should be speaking English.’ When the man continues to question her point of view, she unironically says to the man, ‘Why do you care about them? I wasn’t talking to you.’ Ploss tells the man she has the right to harass these workers. After that, she asks the man, ‘why are you wearing a facemask?’

The man reminds her that there’s a ‘global pandemic going on, she answers: ‘Oh, okay. So you are coming over here to be a social justice warrior. ‘As he’s a black man,’ Ploss elongates sarcastically, ‘He’s going to defend the brown man from this white woman who is practicing white privilege because she happened to walk by and heard this man talking to all of the workers in Spanish.’

After seeing the incident on social media in 2018, Ploss served as press secretary for anti-LGBTQ campaigner Scott Lively, who insisted in a post ‘I’m not backing down’ following the controversy her video stirred. In another post, she wrote, ‘Good Morning, Patriots, So if you want people in America to speak English, that makes you a “racist,” accompanied by a confused emoji.

Since her video went viral in the hours, a petition was set up to remove Ploss and her show from WSMN’s airwaves, collecting 6,538 signatures. ‘We are demanding WSMN Radio to do the right thing, suspend her radio show, and stop providing her a platform to spread racist rhetoric, hate, and ignorance. A campaign organizer Julia K. Morrin mentioned on the page. ‘Hate has no place here.’

After this incident, WSMN stated to its website, ‘Ploss was ‘no longer affiliated or associated in any way with WSMN’ In addition to that, ‘We at WSNM value freedom of expression, freedom of speech, and assembly,’ the concern continued. ‘We will not tolerate racism, discrimination, or hatred. We continue to offer on-air opportunities for education, discussion, and the exchange of ideas and opinions,’ the company concluded.